After a while, I’m publishing a blog post which made me interested. With the recent tweets about the undocumented SystemFunction032 Win32 API function, I decided to quickly have a look at it. The first thing I noted after Googling this function was the source code from ReactOS. Seems like other SystemFunctions from 001 got other cryptographic functions and hash functions. The SystemFunction032 is an RC4 implementation. This API is in the export table of Advapi32.dll

The export table entry points to the DLL Cryptsp.dll which actually has the function implemented and exported.

This is the disassembly of the function which does the RC4 encryption. It takes in the data and key structs as parameters.

END_OF_DOCUMENT_TOKEN_TO_BE_REPLACED

What is a Callback Function?

For example, let’s take the function EnumWindows from user32.dll. The first parameter lpEnumFunc is a pointer to a callback function of type WNDENUMPROC.

The function passes the parameters to an internal function called EnumWindowsWorker.

The first parameter which is the callback function pointer is called inside this function making it possible to pass position independent shellcode.

END_OF_DOCUMENT_TOKEN_TO_BE_REPLACED

In my previous article Exploring the MS-DOS Stub I stated that after experimenting, the Windows loader only cares about the e_magic and the e_lfanew members from the _IMAGE_DOS_HEADER. Because the rest of the members of the DOS header is used by MS-DOS to execute the stub program. Check it out if you have not.

If you take a PE file and null out the MS-DOS header and the MS-DOS stub program leaving out the e_magic and the e_lfanew values, the PE will still work fine as the rest is not needed by the Windows PE loader. The e_lfanew address at offset 0x3c is important as it points to the beginning of the _IMAGE_NT_HEADERS structure which is the actual start of the PE file.

Since those values are not important we can insert an HTML comment from offset 0x2 which is the e_cblp value and begin an HTML comment and end the comment at the end of the PE and append our HTML/PHP/ASP/JSP file contents.

I wrote a simple program in C to automate this task. You can provide your PE file and the HTML/PHP/ASP/JSP file to inject and it will generate an HTML file. You can rename the file into the extension you desire.
END_OF_DOCUMENT_TOKEN_TO_BE_REPLACED

A long time ago when I got my first computer, I accidentally opened a 32-bit demo with a nice chiptune inside MS-DOS and it worked. I was surprised by how this happens. I was curious to find out how this works behind the scenes. Back in the time I was a little kid and had no clue about programming. This curiosity leads me to discover amazing things I never imagined.
First, let us have a look at the PE header. It starts with the MS-DOS header and contains a 16-bit MS-DOS executable (stub program). 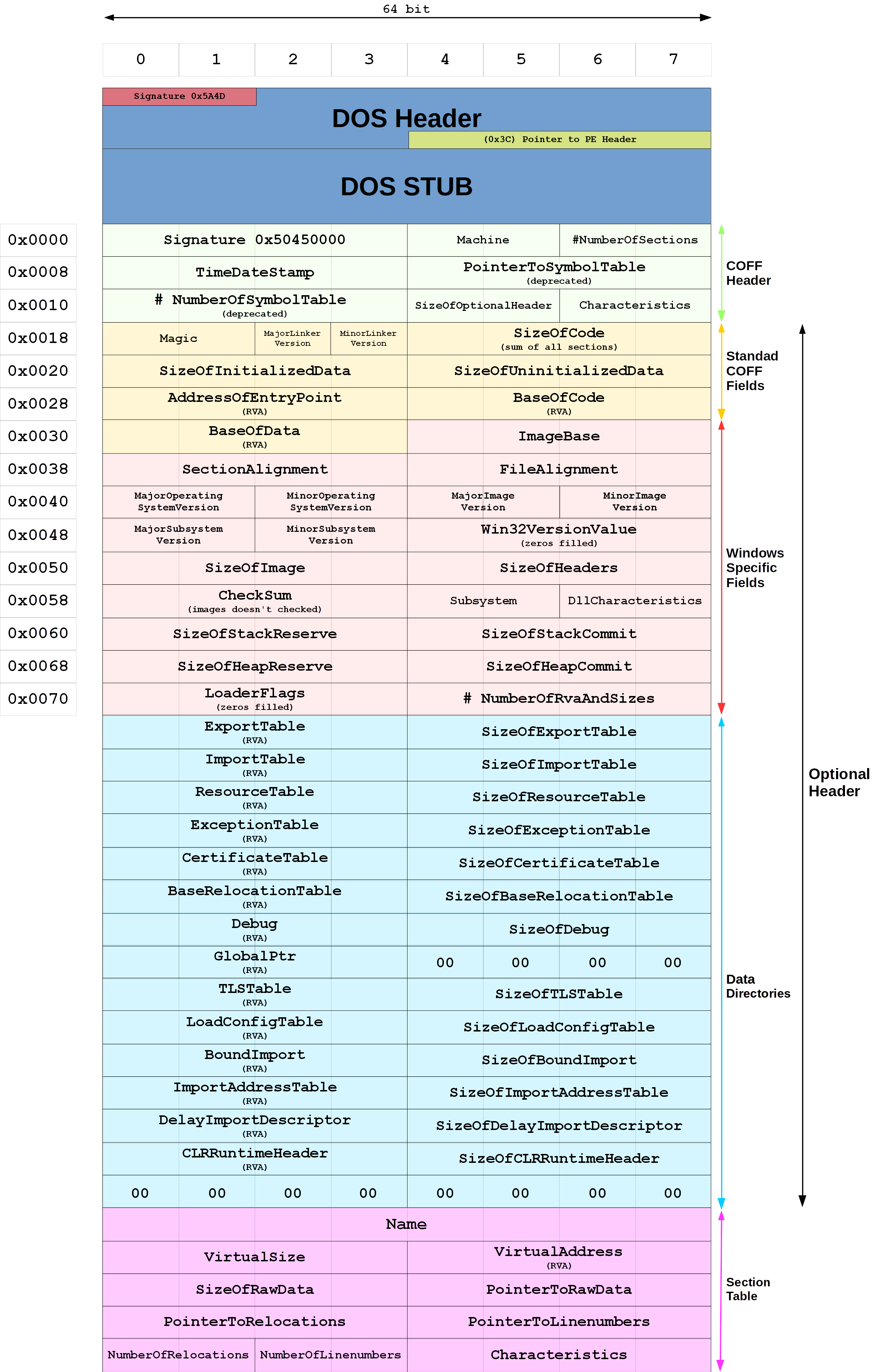 I first want to thank eLearnSecurity for creating such a course on this topic of exploit development. I have always been a big fan of the Windows operating system. For the past few years, I have spent a lot of time on Windows reverse engineering, Windows internals and exploit development on Windows. However, the thing I liked the most about this course is about the diversity they have with both Windows and Linux both x86 and x86_64. I spent quite a good amount of time on learning Linux exploit development and internals and I totally loved to understand those concepts no matter how hard they were to grasp. It is a feeling I cannot explain ?

As usual, this is the introductory module where you will get a nice understanding of Linux internals and basics of stack-based buffer overflows and identifying them.

The labs included for this module are:

END_OF_DOCUMENT_TOKEN_TO_BE_REPLACED

PowerShell has gained popularity with SysAdmins and for good reason. It’s on every Windows machine (and now some Linux machines as well), has capabilities to interact with almost every service on every machine on the network, and it’s a command-line utility. For the same exact reasons, PowerShell has also become a favourite method of attackers interacting with a victim machine. Because of this, organizations have gotten wise to this attack vector and have put measures in place to mitigate its use. But there’s another way! Many don’t know of another built-in Windows utility that actually pre-dates PowerShell and can also help them in their  pentesting engagements. That tool is Windows Management Instrumentation (WMI). This tutorial will be a small introduction to not only understand the usage of WMI to enumerate information from local and remote machines, but we’ll also show you how to start and kill processes! So let’s jump into WMI 101 for pentesters.

I will keep this article at an introductory level to understand how to enumerate information at a high level. But as with most tutorials, let’s define some terms and provide some historical background. This may get dry but stick with me.

“Windows Management Instrumentation (WMI) is the infrastructure for management data and operations on Windows-based operating systems.”

So what does that mean? Simply, WMI stores a bunch of information about the local machine and allows you to access that data as well as manage Windows computers locally and remotely.

WMI came pre-installed in Windows 2000. It was made available as a download for Windows NT and Windows 95/98. For historical purposes, Monad, was born in 2002 with its first public appearance in 2003. In the spring of 2006, Monad was renamed Windows PowerShell and didn’t make a final release until November of 2006.

By default, WMI can be accessed by the Windows Script Host (WSH) languages such as VBScript and JScript. From Windows 7 PowerShell can be also used to access WMI. Furthermore, the IWbem COM API can be used with C/C++ and the ‘System.Management’ namespace with .Net languages such as C#, VB.Net and F#. Almost every popular programming languages such as Python, Ruby, PHP, Delphi, et al have third-party libraries or built-in libraries which support WMI.

The command-line interface to access WMI is called the Windows Management Instrumentation Command-line (WMIC). However, WMI can also be accessed directly with PowerShell. From PowerShell v3 onwards, CIM (Common Information Model) cmdlets can be found. The CIM cmdlets can be used to interact with WMI over WS-MAN (WinRM). These CIM cmdlets will aid us when WMI is blocked but WinRM is allowed on the target machine.
END_OF_DOCUMENT_TOKEN_TO_BE_REPLACED

I’ve previously published a post on extracting table names when /or/i was filtered which leads to filtering of the word information_schema. I did some more research into this area on my own and found many other tables where you can extract the table names. These are all the databases and tables I found where we can extract table names apart from ‘information_schema.tables’. I have tested the following in 5.7.29 MySQL and 10.3.18 MariaDB. There are 39 queries in total.

END_OF_DOCUMENT_TOKEN_TO_BE_REPLACED

WebARX is a web application firewall where you can protect your website from malicious attacks. As you can see it was mentioned in TheHackerNews as well and has good ratings if you do some Googling.
https://thehackernews.com/2019/09/webarx-web-application-security.html

Let’s first try on their own website. This is a simple LFi payload.

END_OF_DOCUMENT_TOKEN_TO_BE_REPLACED

Generally in application security, the user input must be sanitized. When it comes to SQL injection the root cause most of the time is because the input not being sanitized properly. I was curious about Windows Management Instrumentation Query Language – WQL which is the SQL for WMI. Can we abuse WQL if the input is not sanitized?

I wrote a simple application in C++ which gets the service information from the Win32_Service class. It will display members such as Name, ProcessId, PathName, Description, etc.

This is the WQL Query.

As you can see I am using the IWbemServices::ExecQuery method to execute the query and enumerte its members using the IEnumWbemClassObject::Next method. END_OF_DOCUMENT_TOKEN_TO_BE_REPLACED

The binary fltMC.exe is used to manage minifilter drivers. You can easily load and unload minifilters using this binary. To unload the Sysmon driver you can use:

If this binary is flagged, we can unload the minifilter driver by calling the ‘FilterUnload’ which is the Win32 equivalent of ‘FltUnloadFilter’. It will call the minifilter’s ‘FilterUnloadCallback’ (PFLT_FILTER_UNLOAD_CALLBACK) routine. This is as same as using fltMC which is a Non-mandatory unload.
For calling this API SeLoadDriverPrivilege is required. To obtain this privelege adminsitrative permissions are required.

Here’s a simple C code I wrote to call the ‘FilterUnload’ API.
END_OF_DOCUMENT_TOKEN_TO_BE_REPLACED